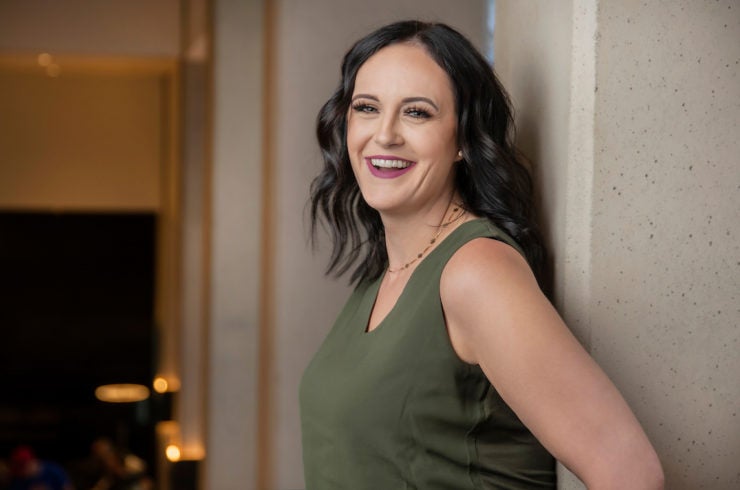 After breastfeeding her third baby, Jennifer Sesser felt a little discouraged. “I loved my breasts when I was nursing,” she says. But post-weaning, her breasts felt like shadows of their former selves.

“I just felt like after three kids my breasts were deflated,” she says. “I needed them, mentally and physically, to be better.” Breast augmentation gave Sesser exactly what she needed to feel like herself again.

A friend of Sesser’s had already opted for the surgery. “She’s a mom just like me. We were both done having children and needed a little bit of a boost.” Her friend saw Roy Semlacher, MD, for a breast augmentation. “She had a great experience,” Sesser says.

With her friend’s recommendation, Sesser called Dr. Semlacher to schedule a consultation a little over a month after weaning her son.

Sesser says Dr. Semlacher and his staff made her feel welcome and comfortable from the start. “The first appointment we just sat at his desk and talked about what I wanted and what breast shape was right for me.” At the second appointment, they talked about size. “It was actually kind of fun. It was like shopping.”

To get an idea of what different sizes would look like, Dr. Semlacher provided a sports bra and different sized inserts for her to try on. “He doesn’t push a bigger one on you,” she says. He made a suggestion based on her body type, but the decision was ultimately Sesser’s. “I went a little bigger (than his recommendation).” Sesser says the choice of saline or silicone implants was also left to her, after a careful discussion of the pros and cons of each. She opted for saline.

The day of surgery at MultiCare’s surgery center in Gig Harbor, Dr. Semlacher had her stand while he carefully drew a surgical roadmap on her body with a marker and explained exactly what was going to happen during the procedure.

“Of course there’s a little anxiety, but everyone was very calming.”

When she woke from surgery, Sesser says she wasn’t in any pain, which was a relief. “I was kind of worried because when I went in for my last appointment before surgery he didn’t prescribe any narcotics,” she recalls. “I was worried I would be in immense pain.” Dr. Semlacher prescribed Tylenol with codeine and promised her that’s all she would need. “He was right,” she says.

“I had the surgery on Thursday and was back to work on Monday.”

The ease and speed of her recovery was the biggest surprise, Sesser says. She credits Dr. Semlacher for being gentle during the procedure. “I’ve had surgeries in the past and when you wake up you can kind of tell whether the surgeon has been a bit rough.”

Dr. Semlacher put her on physical restrictions for six weeks, which turned out to be the worst part of recovery. “I had a follow-up appointment at four weeks and begged him, ‘Can I please work out?’ So he let me do a modified work out.”

Rather than traditional bandages, she had a clear sticker bandage so she could see both her breasts and the healing at her incision. “It was instant gratification,” she says.

Her confidence returned as quickly as the healing. “We went out for a birthday and I wore a very low cut dress that I couldn’t wear a bra with,” she says. She looked and felt amazing.

Sesser says she’s thrilled with her outcome and recommends the procedure — and Dr. Semlacher — to women looking for a boost.

While some worry about the expense, Sesser says she considers it a bargain. “The cost doesn’t equal the amount of confidence you get back.”

Learn More About Breast Augmentation Surgery
Contact us today to request a consultation with one of our board-certified plastic surgeons.
Request a Consultation